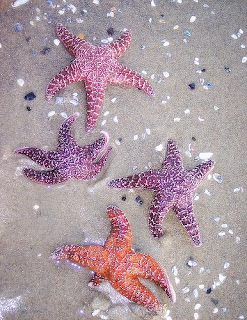 Today I'm offering up Starfish by Eleanor Lerman. The line breaks are strange - more like a prose poem, deserving of a good solid paragraph. Still, I like it so much. Seems like the perfect poem for the day after Thanksgiving. 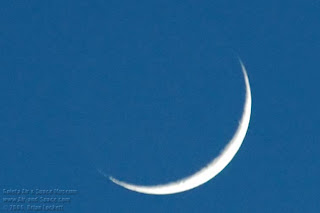 I love the idea of a Monday Poetry Stretch to help us limber up for the week. This time around, Tricia at The Miss Rumphius Effect has suggested a lune. Here's my contribution, guided by syllables (5/3/5)rather than word count:

A Question, An Answer

You – yes, you, Moon - how
does dead stone
shine? Sunlight finds me.

Tricia over at The Miss Rumphius Effect has challenged people to write/post a list poem. Here's mine. It was originally written as a bout-rimes sonnet (can you tell by the end words?? Especially the "Hobo-/ken" which I'm especially proud of.) The bout-rimes poem is an experiment I love - it gets you out of your usual vocabulary/topic ruts. And the poem definitely qualifies as a list.

THINGS TO WORRY ABOUT

I worry about my head. I worry: Is it June
or is it December? I worry whether the stress
on my brain is greater when the moon
waxes or when it wanes. I howl. I obsess
about everything: cracks in the sidewalk, a snake
in the grass. Sneakers or boots? It's never moot
whether we come or go, eat bread or eat cake.
Life's little -ifuls (merc, bount-, beaut-)
are no tethers to keep me secure. Did Garbo
never get to be alone? And if the play
is the thing, what's not? From Cairo to Hobo-
ken, my anxious nose sniffs, sniffs: Is day
better than night? Jeans with this or rhinestones?
And those terrorists. And perfume or cologne?

Poetry Friday - Not Exactly a Poem 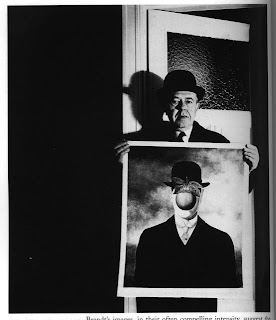 It's the French surrealist painter Rene Magritte's birthday today and I can't resist posting this photo (by Bill Brandt) of the painter holding one of his own paintings. The image has nothing to do with poetry, unless you think about how indirect poetry is - how a pipe is not a pipe. And how a poem is like a mirror, yet is not a mirror. And how like a spiral a poem can be, coming back on itself. And how a good poem reveals something new every time you read it. And how form follows content. And how near-repetition - in the case of a poem, that's rhyme - plays on our senses. And how a poem is comfortable with uncertainty. And how a poem casts a shadow someplace unexpected. And how a poem tells the truth, and how a poem lies. And how open to interpretation any good poem is.

Other than that, the photo has nothing to do with poetry. 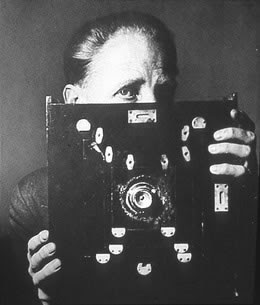 I found another photo to post - this one is also by Bill Brandt, and it's a photo of Bill Brandt. Notice how he only lets one eye show, and lets the camera lens stand in as his other eye? Seems to me that artists always find a tool outside themselves to look through. For a poet, words serve the purpose of a camera lens, no?
at 1:17 AM 8 comments: 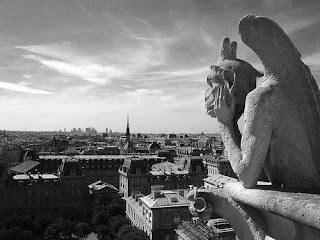 When the long season of rain comes to Seattle, I begin to fantasize about going to Paris. Not Cancun, not Santa Cruz. Paris - where it also rains. Well, in honor of rain and Paris, I'll post a poem from my latest book, Imaginary Menagerie, and it's about a gargoyle. Tomorrow, when I have my coffee, I'm going to pretend that I'm sitting in the park adjacent to the beautiful and simple church of St. Julien-le-Pauvre, in the shadow of Notre Dame. Maybe it's beginning to rain. Maybe a gargoyle from the cathedral looks down on me.

My mouth is a rainspout.
I screech. I shout.

How can a beast fly
with stone wings?

I fly when the bells ring
and the hunchback is home.

Does a stone beast sleep
in a stone nest?

I am on guard.
I never rest.

Poetry Friday is being hosted this week by Yat-Yee Chong

Thanks to Sara, who sent me on a hunt for photos of gargoyles on the National Cathedral in Washington, D.C. They are especially eerie, since they are "modern" (sunglasses, movie cameras, gas masks, etc.) Eek. Here's one to give you nightmares: 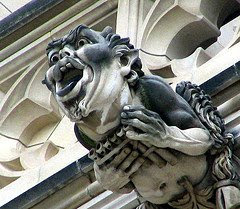 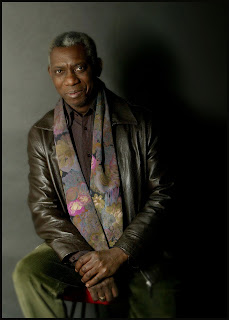 For Poetry Friday: A Song in Honor of Election Day 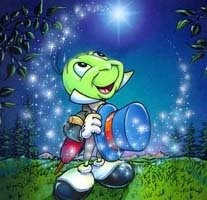 To honor the election results, I offer up the lyrics of this lovely song as "Poem" of the Week. 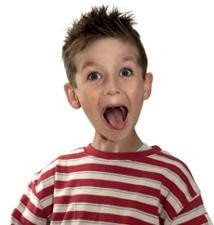 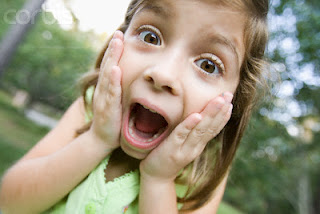 Today, I'm worrying about the integrity of the election - hacked machines, voter suppression, etc. I just can't stop hearing that voice in my head that maybe 2000 and 2004 were rigged somehow. For some frightening pre-election reading, go to this full-text copy of Robert Kennedy Jr.'s article in Rolling Stone, Was the 2004 Election Stolen? (You know what Tom Stoppard said, right? "It’s not the voting that’s democracy, it’s the counting.") But I am STILL optimisitic - I've sent my ballot in. Please, don't forget to vote.

While I wait for tomorrow night's first reports, I offer up these delicious few lines of a long and wonderful poem which plays on McCain's "Straight Talk Express" and on "Joe the Plumber" - it's by Elaine Magliaro over at the Wild Rose Reader and you can read the whole poem here :

Who’s on Board the Straight Squawk Express? or Joe the Plumber Et Al

Joe the plumber,
Mack the Knife,
Hal the husband,
Val the wife,
Don the dentist,
Dick the doc,
Phil the farmer,
Hank the hawk,
Gail the grocer,
Ken the catcher,
Pat the daft
Police dispatcher... In honor of the Day of the Dead, I'm linking this clip from Vermont Public Radio about the Ghost of College Hall (pictured to the right.) The ghost inhabits the upper stories of the building, which is the architectural centerpiece of Vermont College of the Fine Arts in Montpelier, where I teach. Some people say there is a malevolent spirit that claims the basement....
at 12:01 AM No comments: