How Is a Poem Like a Cartoon? Part II


First, a poem by W.S. Merwin (it seems the older I get, the more I like Merwin) about late summer for my Poetry Friday contribution:

At home in late summer after the long
spring journeys and their echoing good-byes
at home as the year's seeds begin to fall
each one alone each in its own moment
coming in its blind hope to touch the earth
its recognition even in the dark
knowing at once the place that it has touched
the place where it belongs and came to stay
this is the place that I wanted to hear
to listen to the daylight and the dark
in this moment that has come along with me.

Fine goal, to listen to the daylight and the dark.

Next: An update on last week's post about an interview of Dusan Petricic talking about how a poem is like a cartoon. This week I hope you'll read an elaboration on that theme - it's an essay by the wonderful poet Cody Walker who uses the New Yorker's cartoon caption contest to teach students how to write poetry, reminding them that economy of expression (rather than schmears of "lyrical" adjectives) in both genres is paramount - not only is "right words/right order" good advice, but so is "as few words as possible."

At one point in "Captions in the Classroom," Cody - who is a former winner of the Caption Contest, former "Poet Populist of Seattle," and current teacher at the University of Michigan in Ann Arbor - says this: "Inexperienced writers sometimes imagine that good writing comes from good ideas. But that’s not right: good writing comes from good sentences. It comes from caring about sentence construction: the rhythm of the clauses, the placement of the predicate. And working on captions—fiddling with punctuation and modifiers—reinforces this lesson wonderfully"

You can read more of Cody's thoughts about poetry at The Kenyon Review and there are examples of Cody's economical ditties  online - don't miss his Mad Gardener poems (and try writing one yourself - harder than it looks!)  He's outrageous and wonderful, and he has a new book is out titled The Self-Styled No-Child: "This second book of poems by Cody Walker offers an unlikely array of characters: Edward Lear, Mitt Romney, Amy Clampitt, and Andy Kaufman share the stage. Walker himself is ever-present, with his shrugs, his heartbreak, his "way-out rhymes": 'I'd like to write some lines about the snow, / but -- I dunno, / the snow seems so / fleeting: / a flock of gulls, late for a meeting.' Full of comic interruptions and grave forecasts, these poems surprise, delight, and terrify."

Cody's practices what he preaches, and his advice is good: Give the Caption Contest a try. Go ahead. Do it.

For Poetry Friday, here's a little something I read over at the Art of the Picture Book blog. It's from an interview of the Serbian/Canadian illustrator and political cartoonist Dusan Petricic (author/illustrator of My Family Tree):


“I love poetry. I think it is the most important field in literature for me. With poetry you have to be very precise, very focused and explain simple things. There’s always something a little bit conceptual in each poem. So I love to do that. It’s a lot to do with my opinion about cartoons in general, not only political cartoons. The cartoon is a way of thinking. So poetry and cartoons are similar to me. And that similarity is very simplistic, with the concept of how to find the right, the most precise way to explain yourself. With the least possible words.”

Well said!  So my poetry contribution this week is not only that quotation but one of Petricic's cartoons -  a piece of social commentary that definitely explains itself with the least possible words. Think of it as a poem about America in the year 2016. 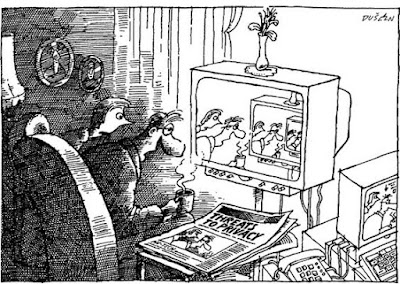 You'll find the Poetry Friday round-up (and a wonderful poem by Howard Nemerov titled "Summer's Elegy") over at Tara Smith's blog, A Teaching Life. And I have a post up this week at Books Around the Table, featuring a link to the blog mentioned above, Art of the Picture Book. Enjoy!