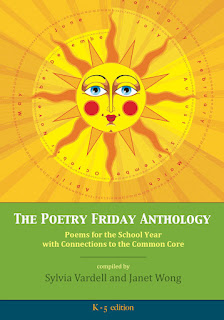 SO PROUD TO BE PART OF THIS!
A terrific new anthology of contemporary poems for kids,
collected by Sylvia Vardell and Janet Wong.
One poem per week per grade level, through the entire school year.
Core-curriculum-specific.
75 poets, 288 pages
Click here to read more.
Click here to order.

The schedule says the round-up is over at Andi Jazmon's great blog, A WRUNG SPONGE. But I don't see any posts there since July 20, and I know Andi and her family have been having a hard summer. Send good thoughts her way, and I'll update in the morning (it's 1:00 a.m. right now) if there's a change. 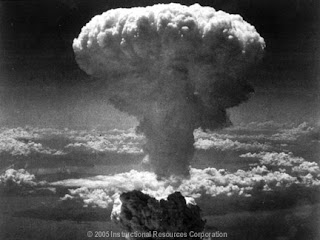 August 6th sneaks up on me every year. Often I'll be fixing a picnic, feeling the release that true summer brings me - the obligation to accomplish something recedes, and the new obligation to surrender to sunshine takes over. I look for shade, think about a swim in the saltwater, eat some potato salad, drink some lemonade, turn on the sprinklers, any one or all of the above. Pure glorious summer stuff....then I realize it's August 6th, the anniversary of our bombing of Hiroshima, and it's like I fill to overflowing with dark feathers and can't breathe for a minute, and the heat intensifies in a disturbing way. These lines come to mind, from the poem "Dover Beach" by Matthew Arnold.

"...we are here as on a darkling plain
Swept with confused alarms of struggle and flight,
Where ignorant armies clash by night."

And, of course, I think of John Hersey's terrible and beautiful book, Hiroshima, which I read in college when the war in Vietnam was raging. I still have my marked copy, and I usually find some time before the end of the day to find it and look through it:

“The crux of the matter is whether total war in its present form is justifiable, even when it serves a just purpose. Does it not have material and spiritual evil as its consequences which far exceed whatever good might result? When will our moralists give us an answer to this question?”
― John Hersey, Hiroshima

I don't have anything new to say or add. Having grown up with this anniversary haunting and worrying me, eventually what can be said is said, and I have to be satisfied with how impossible it is to articulate what I feel. But I do think there is an obligation to mark the moment. My dad fought in the Pacific in WWII, and my mom sometimes suggested, as I was growing up and asking questions, that the dropping of the bomb forced the end of the war and saved lives - it was what she needed to believe because it brought my dad home to her. My parents belonged to "the greatest generation" and accepted the official line - at least in this case, they did. The next generation down - my siblings and friends and I - had a different take on war in general, and we embraced the idea of questioning authority. I thought we were the generation of activism, but maybe we were, and are, the Doubting Generation, the generation of cynicism and irony. I don't know whether my own grown children even think about the bomb on August 6th, though they certainly suffered through my talking about it each year. In some ways, it would be nice for them - and for their children and for all our children - if it were just another happy summer day.