Richard Kenney is one of my favorite contemporary poets. Why? Formal dazzle, perfectly tuned wit, expansive intellectual curiosity, brilliant ear for the music of the words.
I saw one of his poems today and thought I would share it, even if it's not March. I'm feeling bloom-ish, not sure why. Maybe it follows from my last post, where I reflected on abundance. Or maybe it's just the word "plums" in the last line - I've been in love with cherries since June but as August approaches, I feel myself tempted by plums. Late August, maybe a mango poem.

This weather’s witty
Peek-a-boo. A study in
Insincerity.

Blues! Blooms! The yodel
Of   the chimney in night wind.
That flat daffodil.

With absurd hauteur
New tulips dab their shadows
In water-mutter.

Plums on the Quad did
Blossom all at once, taking
Down the power grid. 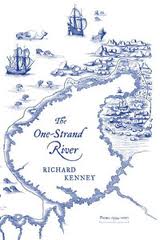 Kenney's latest book is The One Strand River. Definitely get it and read it.  You can see more of  his work online at thepoetryfoundation.org

Life is just a bowl of cherries --
Don't take it serious,
Life's too mysterious.
You work,
You save,
You worry so,
But you can't take your dough
When you go, go, go.

So keep repeating "It's the berries."
The strongest oak must fall.
The sweet things in life
To you were just loaned,
So how can you lose
What you've never owned?

When I was almost 7, my family moved from the Seattle area to the Santa Clara Valley of California, about an hour south of San Francisco. That was before it became “Silicon Valley,” and it looked like this:

It actually did look like that – it’s not just nostalgia playing tricks with my mind. It was so beautiful, such a generous landscape. Of course, we moved into a house that was part of a development that was one of dozens of developments that would eventually wipe out the orchards and pave over the farmland and replace it with freeways and suburbs.  But my family got there before too much had been destroyed – 1956 – there were still great fields of garlic and artichokes to the south of us, with cherry orchards surrounding my neighborhood.

Each spring, walking home, we watched the cherries ripen. Wild mustard plants grew at the base of the trees in late spring, enouraged by farmers because of the nitrogen they provided the soil, and if you wandered far enough into the orchard, all you could see was mustard blooms and fruit trees, no matter which way you looked.

Then, in June, the cherries were ready.  I picked them every day on the way home from school – we all did, everyone who walked past them,  and we ate them until we couldn’t eat any more.  I like to think the farmer knew that the school kids would eat all the cherries from the row of trees nearest the road. We felt like there was enough for everyone, and then some.

Even a decade later there were still enough orchards in the valley that high school kids could make their summer money in the canneries. The heady smell of hot tomatoes and ripe fruit would drift out all summer from the Contadina and Del Monte canneries in the Bay Area.

Reading Laura Kvasnosky's post last week over at Books Around the Table, about the weddings of her son and her daughter, and the lovely poem by Li-Young Lee about peaches, I started thinking about those cherry trees, and about the Santa Clara Valley. I thought about orchards and summer, and about happiness and abundance. Sweet, sweet cherries.

Rainier cherries from east of the mountains have now gone on sale in the local markets, and I have buying a lot of them. The person selling them usually lets you sample one or two first:

They're scrumptious, so you buy some, but only a handful because they cost a lot:

But before you go home you decide that’s not nearly enough, and you wander back to buy more: 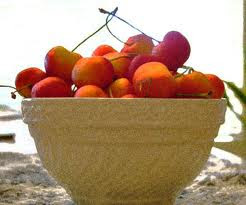 and the next day, when you begin to see the bottom of the bowl, you go back for even more:

What I’m really trying to do when I buy those cherries and eat them, of course, is to conjure up the delicious abundance I once experienced in the Santa Clara Valley. No, not just to conjure it up, but to take it into me, cherry by cherry.

Northrop Frye once described the genres of literature according to the seasons. Fall, according to Frye, is tragedy – fatalism, the hero pushed towards his fate. Winter is irony and satire – the final absurdity. Spring is comedy – new beginnings and happy endings. But summer is romance – the season when belief is in full bloom. Summer is abundance.  No wonder that in the summertime, I want to write something wholehearted, something unrestrained. Not a sample-cherry story, not a handful-of-cherries story, not even bowlful-or-basketful-of-cherries story, but an orchardful-of-cherries story. A story that measures up to this:

So when it’s cherry season, I think about the Santa Clara Valley. If I’m in a writer-ish mood, I think of Frye. I strive to write something authentic, generous, from the heart, full of belief.

If I’m feeling more like a teenager than a writer (that still happens sometimes) I think of George Carlin singing “Cherry…cherry pie…cherry…cherry pie….” Click here to listen to Carlin on YouTube. Usually, Carlin is a Winter kind of guy: satirical, ironic. But singing like this he's all Summer, smooth as honey in the sunshine.  Less literary, but sweet and openly sensual. Abundant, you might say.