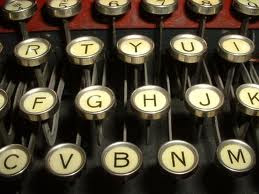 For Poetry Friday today, I offer you a poem by Sierra Nelson, who is the sweetest Force-to-Be-Reckoned-With that I've ever met. I've known her since graduate school, where a mutual professor of ours, Richard Kenney, encouraged a long look at the weirdness and delight of nursery rhymes, curses, blessings, riddles and proverbs. So here's a jump-rope-rhyme-ish poem for you, pure Sierra-style, with a concluding couplet that absolutely shines. The poem first appeared in the literary journal CRANKY:


When I know I'm going to see new work by Sierra, I'm delighted, because I can't predict what it will be like - her work is always fresh, full of heart but not sentimental, always slightly quirky. And she has energy to spare: She writes for the Kenyon Review blog, she co-founded the performance groups The Typing Explosion and The Vis-a-Vis Society (video link - not to be missed) and she teaches classes in creative writing - if you live in the Seattle area you should not miss opportunities to hear her read or to study with her. Here are links to some upcoming events and classes:

Fall Course at Hugo House:"Exploring the Esoteric: Borrowing from Everything to Write New Work"

Oh - one more accomplishment worth mentioning: Sierra is one of the organizers of the Seattle Cephalopod Appreciation Society. Just what it sounds like. They work to increase the appreciation of squid, octopuses, chambered nautiluses and cuttlefish. Their last meeting was on June 13th, but I'm sure they'll have another in the fall - definitely attend. These are occasions for cephalopod-themed celebration - recitations, songs, and (sometimes slightly eerie) octopus movies.

Poetry Friday today is being hosted by Laura Evans at Read Poetry K-12. Definitely head over there to see what other people have posted.
at 12:00 AM 5 comments:

Poetry Friday - Reaching Back to Byron

Back after a long summer hiatus and much drifting around....photos this time seem to be Lord Death, Lord Sheep, and Lord Byron..... 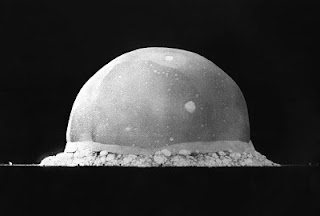 Trinity - The First Moment of the Atomic Age - Lord Death
Today marks the 65th anniversary of the dropping of the atomic bomb on Hiroshima. I usually think silence is the only thing that makes sense when contemplating such a thing, or I look for a poem that's directly about the effects of war. But this year, I found something a little more subdued, a little less direct and more complicated. It addresses science and "perfect Knowledge" - at least this one stanza of the poem does - and then it goes such a strange direction that I don't know quite what to make of it. I suppose that "Julia's eyes" are a way of turning away from large mysteries (like how "Man the wonderful" can engage in warfare) and coming back to the pure pleasures of the physical, touchable world? Well, I'm still working at figuring out what it means - and isn't that what a good poem does? Makes us (or lets us) come back to it again and again, looking for more/

Here's Canto 1, Stanza 92 of Byron's Don Juan - I ran across it while reading Richard Holmes' marvelous book, The Age of Wonder: How the Romantic Generation Discoverd the Beauty and Terror of Science (whew! that's quite a title....) I don't often turn to Byron....though I do turn to science...for my poetic inspiration. It's amazing to me how modern this sounds:


He thought about himself, and the whole Earth,
Of Man the wonderful, and of the Stars,
And how the deuce they ever could have birth;
And then he thought of Earthquakes, and of Wars,
How many miles the Moon might have in girth,
Of Air-balloons, and of the many bars
To perfect Knowledge of the boundless Skies;
And then he thought of Donna Julia's eyes.
------------------
Poetry Friday today is being hosted by Laura Shovan over at Author Amok. Drift over there to check out what other people are posting! [And since Laura posted a great close-up (VERY close-up) photo of a giraffe, I'll post my favorite close-up of a sheep. ....oh, shoot, I can't find it in my files. Well, maybe next week.] Here's Lord Byron on a t-shirt, instead.


[Found my sheep - this was taken in Shropshire, England. Will load both pictures.]
at 4:37 AM 2 comments: