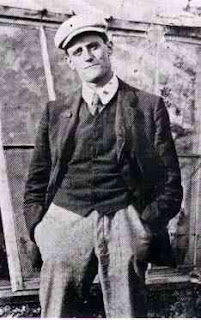 I am listening to an audiobook recording of James Joyce's Portrait of the Artist as a Young Man, read brilliantly by Donal Donnelly. How strange and wonderful the beginning of that story is:

Chapter One
Once upon a time and a very good time it was there was a moocow coming down along the road and this moocow that was down along the road met a nicens little boy named baby tuckoo....
His father told him that story: his father looked at him through a glass: he had a hairy face.
He was baby tuckoo. The moocow came down the road where Betty Byrne lived: she sold lemon platt.
O, the wild rose blossoms
On the little green place.
He sang that song. That was his song.
O, the green wothe botheth.
When you wet the bed, first it is warm then it gets cold. His mother put on the oilsheet. That had the queer smell.
His mother had a nicer smell than his father....

I love that opening. It reminds me that as a writer you are only limited by that voice you hear in your head - you don't have to listen to other voices. You can break the rules. Break the rules with content, break the rules with punctuation, break any rule that says you always have to make sense or be linear in your thinking. You can play. You can invent. Of course, you have to be James Joyce to pull it off, you have to be a brave genius. But we can all aspire to innovation, can't we?

I especially love that this chapter begins under an epigraph from The Metamorphosis by Ovid which reads, in translation, "And he sets his mind to unknown arts...." [Joyce didn't put the full quotation, which goes on to say, "...and changes the laws of nature."]

It's a treat to hear Donal Donnelly read this. He has the perfect voice for it - that lovely Irish lilt. And I'm simply ready for this book now. It seems half the books I "read" in college were books I wasn't meant to read until I was over 50. You're so young when you're young.

The photo at the top of this posting is James Joyce in 1904 - 22 years old. Something tells me Joyce wasn't as young at 22 as I was when I was 22. He had already written an early version of Portrait of the Artist As a Young Man by then, though it wasn't put into its final form and published until he was 34.