Sweet, sweet poet. Worked as a statistician for the London office of Standard Oil for eighteen years.

Here is a pig poem by the man himself, and it does just what poetry should do, doesn't it? It paints a picture with words & with the way words sound, but it doesn't answer questions; instead, it leaves the reader a mystery to fall asleep with. And I love those truncated fourth lines in each quatrain. Perfect bending of the formal elements.

The Pigs and the Charcoal-burner

The old Pig said to the little pigs,

'In the forest is truffles and mast,

The Charcoal-burner sat in the shade

With his chin on his thumb,

And saw the big Pig and the little pigs,

He watched 'neath a green and giant bough,

And the pigs in the ground

And when, full-fed, they were gone, and Night

He stared with his cheeks in his hands

At his sullen blaze. 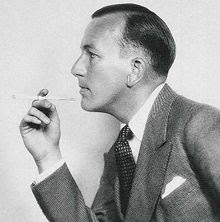 AND since we're on the subject of pigs, I will post this clever poem by the clever Sir Noel Coward, (with apologies to all vegetarians):

Any Part of Piggy

Any part of the piggy
Is quite alright with me.
Ham from , ham from
Ham as lean as the Dalai Lama
Ham from , ham from ,
Trotters, sausages, hot roast pork.
Crackling crisp for my teeth to grind on
Bacon with or without the rind on
Though humanitarian
I'm not a vegetarian
I'm neither a crank nor prude nor prig
And though it may sound infra dig
Any part of the darling pig
Is perfectly fine by me.

["Infra dig"? Noel Coward?] Did you know that Noel Coward worked with the British Secret Service during World War II and was in the Nazi Black Book (along with H.G. Wells)? Or that in the British comedy Red Dwarf, a wax-droid of Noel Coward was available for the entertainment of Lister and the rest of the crew during their visit to a theme-park planet.

Poetry Friday is being hosted this week by Elaine Magliaro over at The Wild Rose: