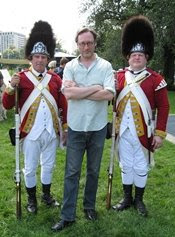 One of the best author photos EVER, bar none. This is M.T. Anderson on the Boston Common with two Revolutionary War re-enacters. Obviously. I think. Or maybe that's friend John Green on one side and friend Tim Wynne-Jones on the other? I wouldn't put it past them. But it's the serious look on Tobin's face that makes it perfect.

The photo appeared in this week's Publisher's Weekly, alongside an interview in which Tobin talks about many things, including those adults who said that Octavian Nothing used vocabulary above a teenager's ability level. Tobin talks about sci-fi where there is a lot of language-building going on next to world-building, and he concludes, "I think kids are excited by language, and they’re not always given credit for that."

Hooray! Well-said. And as far as I'm concerned, I wish some of our leaders would be as honest as Tobin is when he says, about the lessons learned in his research for Octavian, "I think there was also a slow, grinding realization for me of what it is that human beings are willing to do to each other to secure their own luxuries. That was a very sad tutorial I went through, working on this book. There was suffering on an unimaginable scale. I know this is a bit dismal for an interview, but I honestly feel like a full recognition of the capacity of mankind to ignore each other’s suffering is one of the saddest lessons I learned."

I'm all for Hope, I'm all for Change, but first, let's learn the lessons we need to learn, and let's tell the truth about our history, instead of just waving a flag and calling ourselves great. Then , once we've done that, we can turn to optimism and The Dream, if it calls us.
at 5:00 PM