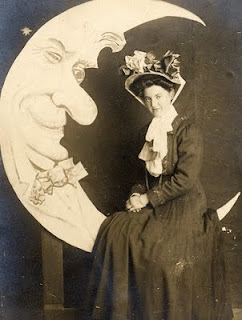 Last week I was  moon-drunk, and there's still something going on between the moon and me, so I must have moon fever. I wrote "Late Night Thoughts" (below) as a response to Tricia's Poetry Stretch over at the Miss Rumphius Effect this week.  The challenge was to write a rictameter (another counted-syllables poem - like the Zeno! Only not like the Zeno!) which is a non-rhyming nine-line poem with the following syllable count: 2/4/6/8/10/8/6/4/2. The first and last lines must be the same. (Of course, that last rule immediately makes me want to bend it - or even break it, though bending rules is much more fun.) When I write in response to a challenge, I'm not sure I produce an actual poem. But I do a few things usually that interest me. In this poem, I enjoyed turning the first two words of the poem into a complete question in the last line. I also liked coming up with line "the sun never rises" - it was like a backward curtsy to Hemingway. Putting howl and now next to each other felt good - almost like singing a Roy Orbison song - oh, I know why! - " in BLUE... BAY...-OUUUUUU!"  The rules say no rhyme, and I assume that's no end rhyme - that's usually what people mean (unfortunately?) when they talk about rhyme. There actually is quite a lot of internal rhyme in these nine lines:  Thoughts/not, might/night, howl/now, moon/soon, one/sun. The "wolf-throated chance" is an image I might actually want to save for a more serious poem. So - here's the second in my Moon Fever series (or so it seems):

howl at the moon?

who knows what happens after that?

You know, the sun never rises

at night -- what kind of friend

is that? Howl now! 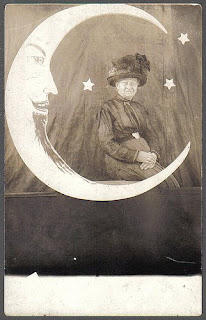 The Poetry Round-Up this week is over at Gotta Book  (thank you, Greg) - You gotta go there and see the links.