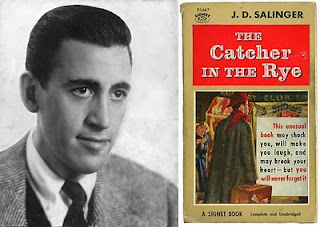 J.D. Salinger died today at age 91, having lived the last half of his life in virtual seclusion ("the Garbo of letters" as the NY Times has called him) after the phenomenal success of Catcher in the Rye. I was only two years old when that book was published, so it was already well-established as a classic of teen angst by the time I read it, and there were other books by then imitating its radically caustic teen voice. I wish I could say I loved that book, as so many people can. When I read it as a teenager, Holden Caulfield made me hugely uncomfortable - so messed up, so self-involved, so mean-spirited  and negative and flat-out unhappy, squeezing his pimples and calling everyone else morons.  I never for a minute believed it was due to his adolescence - instead, I believed completely Holden would grow up to be a self-involved, caustic, unhappy man who looked at himself in the mirror too often.  Even when I was 15, which is probably about when I read the book, I thought life was too short to read it again. But I'm tempted to read it now. I've heard from so many men that that they read it and loved it, and that it's a boy's book. So just to put that perspective on it, I'm going to read it again. I'm also going to read Franny and Zooey and Nine Tales again, which I remember enjoying not long after tossing Catcher in the Rye. When I read those stories about the Glass family, I remember thinking with some relief that I would be able to say I liked something written by J.D. Salinger, because when I was a teenager, you couldn't NOT like Salinger.

I've never, not once, seen a photo of Salinger other than the one posted above. So I've always thought of him as an unrumpled and anal-retentive version of John Cassavetes - the resemblance is striking. Rather than being passionate and creative, as Cassavetes seemed to be, Salinger was (according to my misconceptions) conservative and repressed. But look at the jacket cover of the book below, a memoir written by his daughter. In it, he's a good-looking dad, with a wide grin and a certain Jon-Hamm-of-Mad-Men charm, happy and comfortable in his own skin. Not at all Holden-Caulfield-esque. Amazing, the way we (I?) turn writers into protagonists from their fiction. Shame on me. 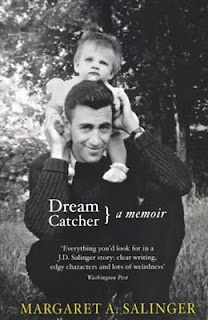