Welcome!! It's Poetry Friday (well, I'm actually posting this on Thursday night so that all of you East Coasters can post before you go to bed!) and I'm pleased The Drift Record will be providing a spot for the round-up this week. You can post your Poetry Friday topics in the Comments field (at the end of this post.) Be sure to provide a link when you comment, since I will not be summarizing during the day outside the Comments field.

Meanwhile, I want to introduce you all to Nancy Bo Flood, a fine poet and author whose debut novel for children, WARRIORS IN THE CROSSFIRE, has just been released by Front Street Books.


Old turtle,
Little crab,
Where should I go?
Where can I hide?

-from Warriors in the Crossfire 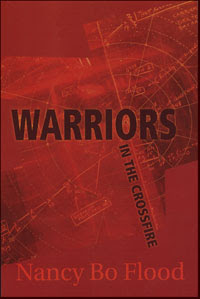 Warriors in the Crossfire is the story of two boys, Joseph and Kento, caught between the battling Japanese and American forces on the island of Saipan during WWII. Each chapter is introduced by a quiet, koan-like poem that invites reflection (and often breaks your heart.)  I love the simplicity of the poem I opened this post with (titled "Courage.")  Here's another, which opens the chapter titled "War":

I interviewed Nancy for The Drift Record, knowing you would love her poems for POETRY FRIDAY:

JL: Can you tell us what drew you to this historical period and setting?

NBF: We were there. That is an overstatement but when our family lived on Saipan, our first surprise was that Saipan is part of the United States, a commonwealth, first put under U.S. care by the United Nations following WWII. Our second surprise was that the aftermath of WWII was everywhere -- rusting tanks and downed planes in the lagoon, Japanese cement bunkers pitted with bullet holes on every beach, and almost every family still recovering. I taught students who shared with me their family stories. I listened. I asked questions. Old timers were eager to "talk story." They encouraged me to tell their story so that peace would prevail, that their children could grow up with schools, enough food and a future. How seldom we think about the families and especially the children who live where wars are fought. Saipan is a tropical island in the western Pacific, the kind one imagines with sweeping white sand beaches and clear turquoise-blue waters. But World War II haunts both land and sea. I stood at the Suicide Cliff where hundred leaped to their deaths. The presence of war washes in and out like the tide. When I wrote Joseph's story, I wanted to write a story of hope, realistic and honest, but also one that expressed not only the horror and destruction of war but the amazing resiliency of the human heart to rebuild and forgive.

JL: What do you think is the role of the writer for children during a time of war and social unrest? Do you see parallels between the story of Joseph and Kento and the stories of children now in Afghanistan and Iraq?

NBF: When children grow up in the midst of conflict, they lose everything, including their childhood. "When will we ever learn?" Through story, a writer can create awareness. To be a child surrounded by war, what is that like? Is it about guns and bombs? I think for many children, it is also about losing precious parts of childhood, forever. School, family home, and even pets. In Faithful Elephants: A True Story of Animals, People and War by Yukio Tsuchiya and Ted Lewin, the elephant keeper tells of trying to kill his dear friends, his elephants. Children around the world relate to loving a trip to the zoo and staring spellbound at elephants curling their trunks or flapping their enormous ears. Why would anyone want to kill them? Fire bombs were exploding over Tokyo. No one had food, especially enough food to feed starving elephants. Who thinks about having to leave the family dog or cat behind, or killing all the zoo animals, when war breaks out? Story makes us stop and see with a new perspective. Story gives us hope. In Warriors in the Crossfire, Joseph loses almost everything he cares about . How could he make his dreams come true without an education? How does a young warrior decide? What will help his family survive instead of perish? Joseph discovers that being a warrior sometimes means to restrain, to hide, to wait. He learns that his father's stories, not guns or bullets - his cultures chants, songs and dances - provide what he needs to survive.

JL: You're a wonderful poet - tell us about how it felt to work on this much longer piece of fiction.

NBF:  Thank you, I am definitely a "poet in progress." Your question, Julie, made me think for several days (and nights!) Here is my "haiku" response:  Poetry captures an essence. /Poetry invites the reader to see anew. Narrative, the novel, captures an experience, usually the unfolding experience of a character in conflict that creates change. Poetry is an essential element through Warriors. Poetry reflects Joseph's transitions from rebel to warrior, from student to teacher. What better source than some of the oldest poetry, Basho's haiku, which is often a riddle of phrases that capture the essence of change, conflict, or a metaphor of the moment. Basho's brief poems invite readers to bring to the poem their yearnings and experiences, to give meaning to make sense to you, the reader, at this moment in your own journey.

JL: Nancy, your poems and now your fiction do just as Basho's poems do -"invite readers to bring to the poem their yearnings...." Thanks so much for sharing your thoughts with readers of The Drift Record. I hope many people will be reading Warriors in the Crossfire.

On April 15th, I"ll be over at Jacket Knack interviewing Namelos's art director Helen Robinson, who designed the cover of Nancy's book.

POETRY FRIDAY readers: Please click on "Comments" to find descriptions and links to what other people are sharing this week!!