Yesterday I posted a photo of a terrifying but beautiful scene, thinking at the time, "Isn't it remarkable that something can be built of such seemingly contradictory elements - beauty and terror?" The photo shows a storm cloud/tornado over a peaceful landscape, and it seemed to me that this photo produced what a good novel or a good poem can produce - thoughts of lives lived under (or changed quickly by) the special circumstances evoked.  Literature does this - conjures up stories where human lives intersect with mysterious, uncontrollable forces.  Here's the photo again, in case you missed it. 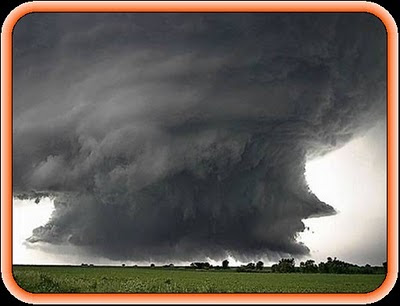 Today, for Poetry Friday, I hunted up a poem titled "A Hermit Thrush" by Amy Clampitt which I remembered from a few years back - I first read it after a big wind storm in Seattle. It's the final four stanzas of the poem which stuck with me:

Watching
the longest day take cover under
a monk's-cowl overcast,

with thunder, rain and wind, then waiting,
we drop everything to listen as a
hermit thrush distills its fragmentary,
hesitant, in the end

unbroken music. From what source (beyond us, or
the wells within?) such links perceived arrive--
diminished sequences so uninsistingly
not even human--there's

hardly a vocabulary left to wonder, uncertain
as we are of so much in this existence, this
botched, cumbersome, much-mended,
not unsatisfactory thing.

I love those adjectives at the end, especially the surprise of the very last one: botched, cumbersome, much-mended, not unsatisfactory.  Despite the flaws, we love life. Despite that storm cloud, a hermit thrush's unbroken song.

The whole poem can be read here. Notice the first line, too - "Nothing's certain." I'd like my creative writing students at Vermont College of Fine Arts to think about that a  bit, because writing for children, which is what I teach, can be a little pedantic - a little too certain of the rightness of the message.  Maybe I'll lecture on the value of uncertainty (negative capability = living in uncertainty) next July.

Poetry Friday today is being hosted today by Toby Speed (oops, I mean by her cat, Kashi) over at The Writer's Armchair.You'll find there what other people are posting around the Web!