I Say It Out Loud: "James Bingham" 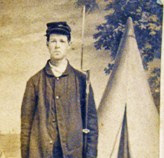 Today is the 149th anniversary of the Battle of Antietam, the bloodiest single-day battle in American history. 23,000 soldiers killed, wounded or missing after one day of fighting - that's hard to imagine. The North and South never even agreed on what to call the battle - in the South, it's called the Battle of Sharpsburg.

The photo above is of one very young soldier whose life ended that day. Look at the way his jacket hangs on him. I see it and I look at the face again, and I think gad, he was just a kid. The website where I found the photo says his last name was Bingham. I'm not sure what his first name was - James? There's a James Bingham who died on the battlefield that day. Records say he was a private in G Company,  Pennsylvania 3rd Reserves. There's a grave for James - and it might be James in that photo - at the Antietam National Cemetery. If it's James, this is where he fell - Miller's Cornfield. 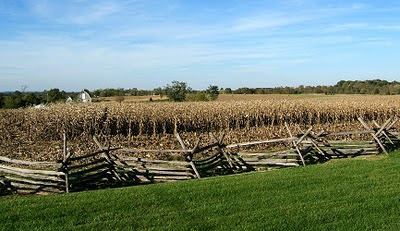 One eyewitness account tells it this way: '"Then a grand sight met their eyes. The number of regimental standards floating in the morning air indicated the immense numbers of the advancing enemy. It was a wonderful sight.  Colonel Douglass, fearing the result of an attack by so large a force on his weak brigade, ran from regiment to regiment exhorting the men not to fire until the enemy reached the fence and began to get over it--to shoot low and make every bullet count."

One of those bullets killed James Bingham.

This makes me think of Patricia Polacco's sorrowful & wonderful picture book, Pink and Say, a story based on Polacco's great-great grandfather's brief friendship with a young black soldier during the Civil War. The young boy - Pincus Ayles - is killed, and Polacco tells the reader,  "When you read this, before you put this book down, say his name out loud and vow to remember him always." 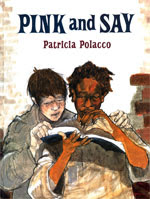