A Poetry Friday Tra-La to SPRING!!

Welcome
to the
Round-Up
for 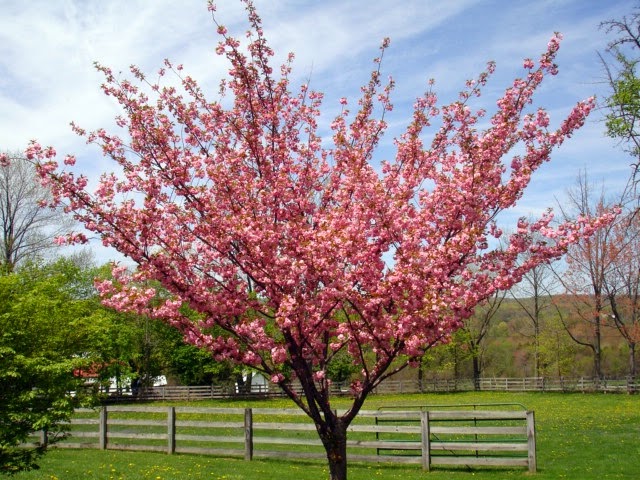 I'm so happy to be hosting the Poetry Friday Round-Up today - it's the first full day of spring. O, oh, oh, lovely, glorious, yahoo, hooray, spring, spring, SPRING! I feel like bursting into song just as if I were in a Broadway musical. "Oh, what a beautiful morning...." (only it's Seattle, folks, so maybe it's raining?) Still, I am so, so ready for the cherry trees to pink up, the skies to blue through, the tulips to bloom. As e.e. cummings wrote:

Spring is like a perhaps hand
(which comes carefully
out of Nowhere) arranging
a window, into which people look (while
people stare
arranging and changing placing
carefully there a strange
thing and a known thing here) and

spring is like a perhaps
Hand in a window
(carefully to
and from moving New and
Old things, while
people stare carefully
moving a perhaps
fraction of flower here placing
an inch of air there) and

Now, down to business. If you have a Poetry Friday link to share, please let me know in the Comments section below by naming your site and giving me the URL for Friday's post.  I'll round things up periodically -  morning, noon and night. Happy spring, everyone!

Steven Withrow is playing with animal names over at Crackles of Speech.
At Gathering Books, Myra Garce-Bacsal pairs up a video of Tracy Chapman with a poem ("Woman Work") by Maya Angelou, in honor of Women's Month.

Heidi Mordhorst is competing in the "March Madness" Poetry playoff and offers us a link to her poem (her fellow competitor is Linda Baie!) over at my juciy little universe.

At Teacher Dance, Linda Baie has a poem by Joyce Sutphen, plus a link to the March Madness playoff (where she competes with Heidi Mordhorst!)

Catherine at Reading to the Core shares an original poem inspired by a painting and Laura Shovan's Pantone Poetry Project.

At Alphabet Soup, Jama offers up some "poesy and posies a la Emily Dickinson" as well as Emily's recipe for Rice Cakes. In addition, you can follow Jama's "Contact Me" link to send her an email if you're interested in signing up for her Poetry Month Kidlitosphere project.

Tabatha Yeatts at The Opposite of Indifference has posted a lovely poem by John Philip Johnson called "After the Changeling Incantation."

Okay, that's it for tonight. I'll do another round-up about 10:00 tomorrow morning (PST.)

Ten More at Sun Up!

Laura Salas talks about how books change as we write them and how they can change us - she's the guest author on Kirby's Lane, the blog of author Kirby Larson. (Is that you standing on your head, Laura?)

In response to the Two Teacher's Slice of Life writing challenge (a poem a day for a month!) Cathy over at Merely Day by Day has posted an original poem titled "The Line Between."

At Author Amok, there's a fascinating explanation of the Welsh form called the "englyn," with examples in both English and Welsh - all courtesy of guest geographer/poet Michael Ratcliffe. And don't miss the Celtic music video.

Tara Smith celebrates spring, too, at A Teaching Life - she's in with an original poem for the Slice of Life Challenge.

Michelle Heidenrich Barnes is part of the March Madness madness, too, and posted her Round One poem at Today's Little Ditty .

Irene Latham looks at Jon Muth's HI, KOO! over at Live Your Poem.

There's Madness everywhere! Check out Buffy Silverman's Round One poem for the March Madness competition - that's over at Buffy's Blog.

Doraine Bennet at Dori Reads delights us with a beautiful poem by Emily Dickinson (how wonderful, the idea of March being out of breath when it knocks at the door!)

From the perspective of his March Madness poem this year, Matt Forest Esenwine looks back at his contribution from last year - that's at  Radio, Rhythm and Rhyme.

And a Mid-Morning Baker's Dozen!

At Poetry Time, Charles Waters posts his fifth entry and fills it generously with three original poems, whetting our appetites with one from the Poetry Friday Science anthology,  one in competition at March Madness and one inspired by his first time on a jet ski!

Liz Steinglass's response to John Green and Sarah Urist Green's video project, The Art Assignment, is a poem that builds itself literally from the feet up (fantastic - how did she do that?) Head over to her website to see it.

An original poem for the March Madness competition - "Perpetual Motion" - is up at Donna Smith's blog, Mainely Write. (Oh, I have a grandson who fits that poem to a T. )

The energetic Diane Mayr provides us with a trifecta of Poetry Friday posts: the first at Random Noodling (about poetry therapy),  the second at Kurious Kitty (a poem by W.B. Yeats) and the third at Kurious K's Kwotes (a quotation from Yeats.)

Vanissa and Matthew, both age 10, are the stars of Margaret Simon's post today, about using new words, over at Reflections on the Teche.

Another star, this time only five years old - Nicolas's "drawn notes" of Hamlet and Ophelia. Check it out at Kortney's One Deep Drawer.

Emily Dickinson is definitely coming in on the springtime breeze! Tricia at The Miss Rumphius Effect has "Dear March" arriving at her door today.

Little Willow offers up a piece of Margaret Widdemer's "Song" over at Bildungsroman.

Ed DeCaria, who started the annual March Madness madness, reflects on what's been learned from the first four matchups over at Think, Kid, Think.

Over at All About the Books, Janet S. features Betsy Franco's A Curious Collection of Cats (with marvelous illustrations by Michael Wertz.)

We get an acrostic poem this week from Joy at Poetry for Kids Joy. Mahalo to you, Joy!

Lorie Ann Grover waxes poetic about the Palouse hills of Eastern Washington over at On Point, and she reviews Peek-a-Zoo! by Nina Laden at readertotz.

Jone shares a Poetry Pairing at Check It Out. And don't miss the sign-up link for Jone's Postcard Poetry Project, now in its sixth year.

And a Few More Drift in on the Spring Breeze...

Mary Lee Hahn helps us usher in the weekend at A Year of Reading with an original poem that goes perfectly with our Saturday or Sunday morning breakfast:  "Pancakes" (Yummm...)

Over at Semicolon, Sherry offers us one of the five Lucy poems written by William Wordsworth. I felt sure Wordsworth would make an appearance for the first full day of spring!

And Amy Ludwig VanDerwater posts an original poem in response to one very original gift: a pine cone.  You'll find it at her blog, The Poem Farm. And congratulations, Amy, on winning the Cybils Poetry award this year - Forest Has a Song is a lovely book!!!
at 9:00 PM