I've recently been researching the life, prose and poetry of the Scottish writer Alastair Reid for an essay soon to be published in Numero Cinq as part of my Undersung series.  Reid, who died a few weeks ago at the age of 88, was a wonderful poet in his own right but was probably best known as a translator of Pablo Neruda and Jorge Luis Borges and a frequent contributor to The New Yorker. Reid also wrote a children's book that is a favorite of friends of mine (maybe it's reached cult status?)  The title (previously out of print but now back back in print via The New York Review Children's Collection) is OUNCE DICE TRICE; with pictures by the graphic artist and illustrator Ben Shahn. 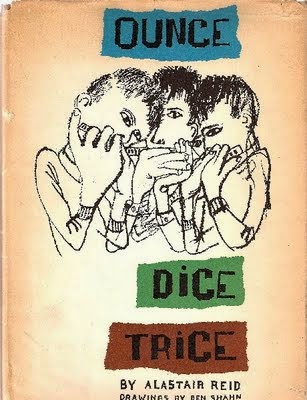 The book includes, among other delights, several imaginative counting systems (from one to ten - a journey that Reid proves can be fun.) Two examples I particularly like:

In the book, Reid collects relatively unknown words and offers them up to us in all their strangeness, the way a talented chef would reveal the secret ingredients of a favorite dish: 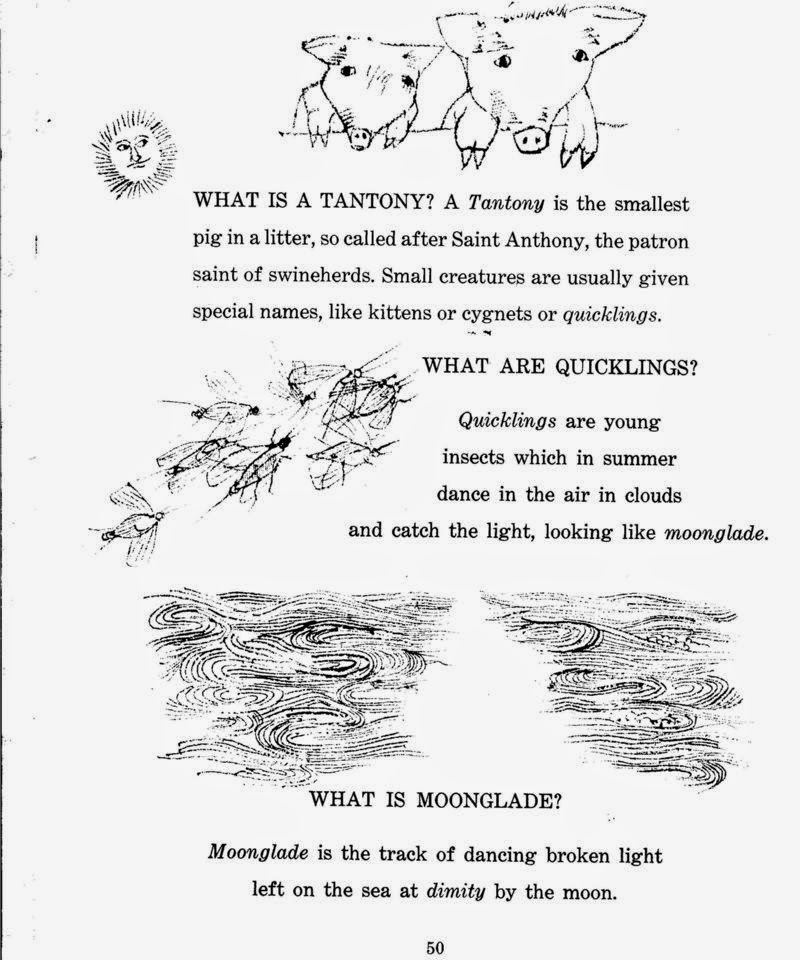 You can hear one of his best poems for adults, "Curiosity," by clicking here. The poem is a dog's and cat's (but mostly human's) view of the old adage "Curiosity killed the cat," with Reid coming down hard in favor of being curious.

That link can serve as my poetry contribution today to Poetry Friday, but here's what I'd really like to share - a description of childhood that Reid wrote:

“The principal difference between childhood and the stages of life into which it invariably dissolves is that as children we occupy a limitless present. The past has scarcely room to exist, since, if it means anything at all, it means only the previous day. Similarly, the future is in abeyance; we are not meant to do anything at all until we reach a suitable size. Correspondingly, the present is enormous, mainly because it is all there is.... Walks are dizzying adventures; the days tingle with unknowns, waiting to be made into wonders. Living so utterly in the present, children have an infinite power to transform; they are able to make the world into anything they wish, and they do so, with alacrity. There are no preconceptions, which is why, when a child tells us he is Napoleon, we had better behave with the respect due to a small emperor."

Like Maurice Sendak, Alastair Reid took children seriously while taking language playfully. I encourage you all to read more of his work. You can listen to the poet, with his slight Scottish burr, read several of his own poems for adults over at The Poetry Archive and at the Scottish Poetry Library.