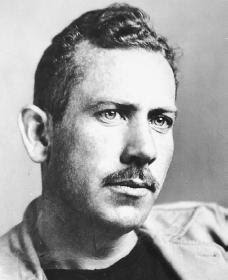 This Day In History tells me that 67 years ago today The Sea of Cortez was published. It was co-written by John Steinbeck and his friend, marine biologist Ed Ricketts (the model for Doc in Cannery Row), and it chronicles their voyage (in a sardine boat!) around Baja California and into what we know as the Gulf of California. The day after the book was released, Pearl Harbor was attacked, and the two men were soon serving in the military. Many people feel that Steinbeck revealed more about his personal philosophy in The Sea of Cortez than in any of his fiction. In honor of the sea creatures those friends observed and documented on their trip, and in honor of my good friend, fellow poet Sierra Nelson, who once captained the Cephalopod Society in Seattle, I offer up a poem of my own, written on a ferry home from a writer's retreat at Sierra's mom's place on Hood Canal, about creatures who live below the surface of the water. Things underwater, where I cannot see them, definitely worry me:

Invocation to the gods of this ferry,
impaired as they are by surf, wind, waves, currents,
torrents, etc. (though no more than I am by
eyes, ears, hair, my own superficial ripples lately):
Make me (please) cognizant (unmummy me), keep me
deeply aware and bewondered by the gilled, the dim
swimmers and crawlers beneath me, the bullheads
and dead-eyed dogfish, the cockles, the unlucky clams—
what am I forgetting?— ah, the octopuses, those
hose-armed cephalopods with their predations, their
scary (embold me) tentacles and their slippery nature.
Deter me from disliking (unloving) these creatures and their
unaired (I seek but cannot see) surroundings. Please accept
regrets, etc., for the unkindness of the above & my limitations.

The assignment on the ferry trip home was to write what we call a "hot rivets" poem - one where the last word of one line rhymes with the first or second word of the line below it, having the effect of welding the two together. It's a wonderful form to work with, taking the poem many directions that surprise you (which is one of the great satisfactions of writing, no?)

Today Poetry Friday is hosted by Mommy's Favorite Picture Books (so maybe I should have chosen a sweeter poem.....) 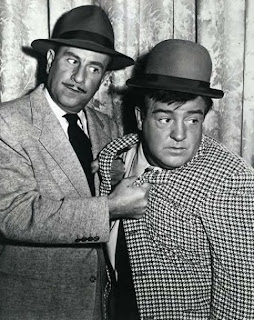 And now for something completely different: This Day in History also tells me that it was on December 5th, 1952 that The Abbott and Costello Show debuted on TV. Probably not an event to remember for most people, and I don't think my parents bought a TV until about 1955, but oh, Abbott and Costello - I used to love going to matinees at our local theater, The Garden, to see their movies. Lou Abbott was so foolish , so sweet, so accident prone and so constantly confused. Here is a little YouTube clip - what can I say? It was a simpler world...
at 11:31 PM