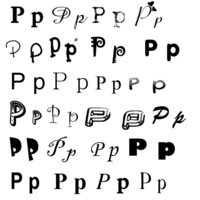 Erin over at Down the Rabbit Hole participated in an interesting challenge: she was assigned a random letter (she got the letter "n") by Lindsay over at Adventures of a Book Thief (who got the letter "m" from someone called HBee over at ....well, you get the pattern) - the goal is to make a list of things you love that begin with the letter you've been assigned. Erin's list is great and includes explanations: night, Neverland, Nosferatu, north, narwhals.....At the end of the entry, she asked if anyone else wanted a random letter and I volunteered. She sent me the letter "P." So now it's my turn. But first, because it's Poetry Friday, I offer up this p-oem:

P.S. - That' p-retty bad. For fun, here are ten of my favorite things beginning with the letter P:

1. POSTCARDS - I'm addicted to real photo postcards, the kind that itinerant PHOTOGRAPHERS made by traveling the country and taking photos of houses, stores, families, events, landscapes - to be mailed or kept as souvenirs. It's especially exciting to find one that shows real PEOPLE going about their lives, where you wonder exactly what was happening before/after it was taken. 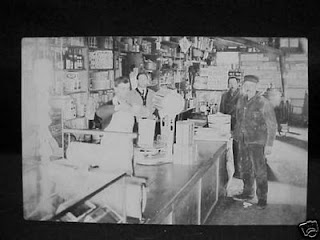 2. PICNICS- It's hard to choose just one reason for why I love these. Is it because they came to me in summer, the season of my birthday and the season of belief? Because even in an industrious family, this was the time people gave themselves PERMISSION to relax? Because we always got baked beans and POTATO SALAD? (No one made potato salad like my grandmother, and then my mother, and now me, and next my daughter....the secret is: go heavy on the dill PICKLES....) Because a picnic was always so temporary - finish eating, pack up the hamper, toss the garbage, shake off the tablecloth, and it all disappeared? The answer is yes to all of these POSSIBILITIES, as well as one more: the setting was always PARADISE - a lake, a river, or saltwater somewhere nearby, sand, driftwood, sun. On some occasions, the scent of eucalyptus trees. Adults falling asleep on blankets while kids PLAYED. 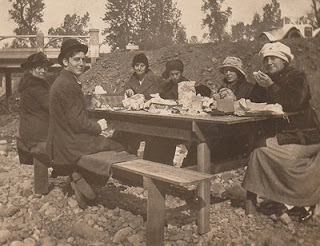 3. PARIS - What's not to love? The small streets of the Marais, the medieval collection at the Cluny, the vintage shopping arcades, the PINK tinge to the old buildings, the slow-moving Seine, the PUPPET theater in the Luxembourg Gardens. Even the manhole covers in Paris are beautiful. Plus, Paris takes you into subcategory "P"'s - PATE, PATISSERIES, PARFUMERIES ....Here is a photo I love of children at a puppet show in Paris - the photographer was Alfred Eisenstadt. Just look at those faces! This is why I love writing for kids: 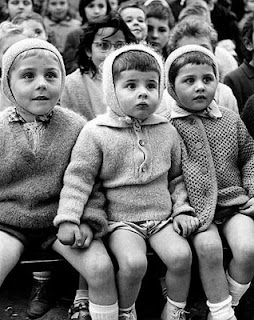 4. PESTO - The perfect combination - olive oil, basil, garlic, Parmesan cheese. Close your eyes and take a bite of anything with pesto on it or in it, and you're in Italy, and the sun is shining. Here's a woman in Orvieto on market day, and a delicatessen in Bologna (photos from Flickr.com) 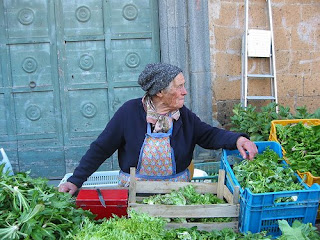 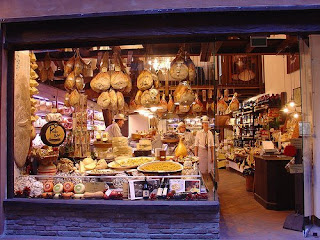 6. PASTRAMI - but not just any pastrami. This has to be a pastrami Reuben sandwich on rye and it has to be at Kenny and Zuke's in PORTLAND (sorry, New York, but Kenny and Zuke's wins, hands down. ) Their Reuben, without a doubt, is the sandwich of choice for the gods on Mt. Olympus. Believe me, this sandwich is worth flying across the country to taste. And the whole Kenny & Zuke's vibe is energizing, PLEASUREFUL, noisy, fun. Top it all off with an egg cream and, for dessert, a traditional regelach. Oh, yum. Even Homer Simpson agrees: 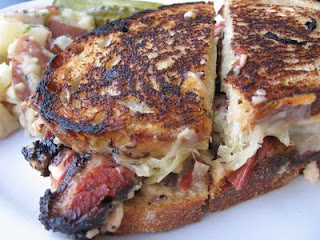 7. PERLMAN - as in Itzhak Perlman. No matter what he plays, you can hear EVERY note clear as a bell, no matter how slight, no note is slighted, and you can hear his love of and respect for and PASSION for the instrument: 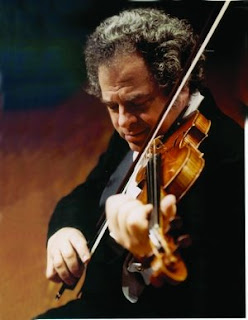 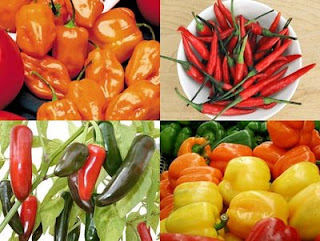 9. PARADES - I love them big or small. Love the floats, love the silly Parade Marshall and/or the Princess looking like waving to the crowd is the highlight of her life. Love the themes - St. Patrick's Day, a local Tulip Festival, 4th of July, Little Italy's San Gennaro. And there's something about a marching band that always makes me break out crying, which is probably not the intended effect. 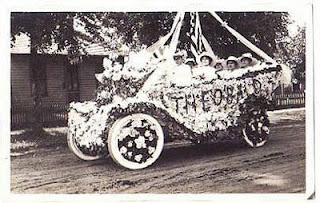 10. PIAZZOLLA- as in Astor Piazzolla, the composer and bandoneon player who revolutionized traditional tango music. Piazzolla was born in Argentina but spent most of his childhood in New York City. He was the son of Italian immigrants, and learned to play the bandoneon when his father, nostalgic for his homeland, found one in a pawn shop. Yo-Yo Ma plays Piazzolla's "new tango" music on "Soul of the Tango: The Music of Astor Piazzolla." 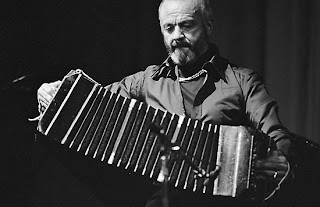 I'll continue the chain....does anyone want me to send them a random letter? Just enter it in the comments field (w/ email address or some way to contact you via a blog...?) and I'll send you one.

11. (Two-for-one) PRIDE AND PREJUDICE and PERSUASION by Jane Austen - perfect books, which I read every few years. And unless anybody thinks these classics are too highbrow, I'll include the BBC version of P & P with Colin Firth (w/Darcy's infamous dive into the POND, though my favorite scene is when he runs toward the carriage as Elizabeth is trying to get away - the way he buttons his jacket and straightens it as he hurries to catch her before she leaves....) And I'll add Persuasion's near-perfect adaptation to film. Thank you, Ms. Austen: 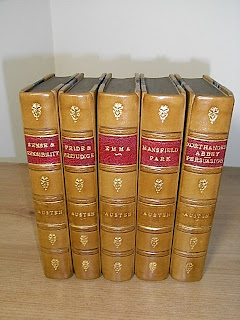 12. POMEGRANATES - which are so beautiful and mysterious and strange. They have always unnerved me, ever since reading the myth of PERSEPHONE and her abduction by Hades to the Underworld. Imagine Demeter's grief as she searches for her daughter, and Helios, the sun, telling her where the girl is. Imagine begging Zeus, the girl's father, to let her come back from the Underworld, and then imagine eating just a few seeds of a pomegranate while you are retrieving her, and condemning your daughter to one season a year below the earth as Queen of the Underworld. Gad. And imagine how nice it would be if we understood our own modern religions in this metaphorical way - as myths to explain the seasons, the weather, the salt of the oceans, the natural world in general - instead of needing them to be the literal truth. Powerful stories, understood metaphorically - that appeals to me. 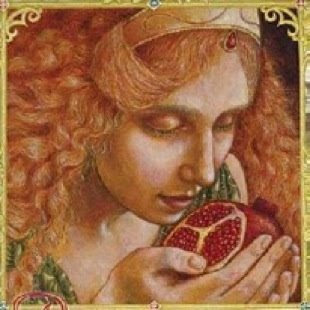 13. PAIN AU CHOCOLATE made by Besalu, Seattle's yummiest PATISSERIE (see #3 sub-categories). Anyone who has ever eaten one of these at Besalu knows what I'm talking about. In heaven, I'm going to have one every single morning, along with a cappucino made by the people at Caffe PUCCINI in San Francisco: 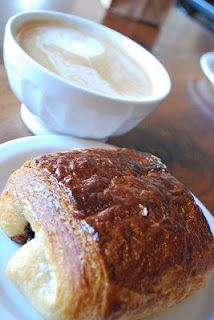 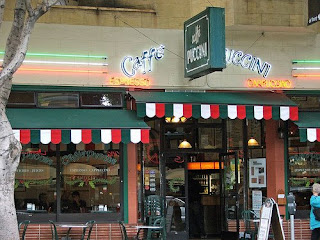 I have to stop this!! (there's PIZZA, PUGET SOUND, PRESENTS, PULLED PORK sandwiches from PASEO in Seattle's Fremont District, PROVENCE, PUMPERNICKLE bread, the PACIFIC Ocean, PROSCIUTTO, POTTER (Beatrix) and PETER(Rabbit), .....and how can I leave out PENCILS?? No, I can't leave out pencils....

and I can't leave out the most important one of all:

P.S. There is no way to leave out PIKE PLACE MARKET in Seattle - one of my favorite places ever. Hard to believe that back in the mid-70's our City Fathers (along with some pretty greedy real estate developers) were talking about pulling it down; now it's probably one of the most visited sites in Seattle (and you can get some fine vegetables, fish, olives, cheese, bread, humbow and PIROSHKIS there...) (and the view of ferry boats out on Elliott Bay is to die for) (strolling around buying grapes, avocados, limes, cilantro, pears, blue cheese, hazelnuts....oh, Pike Place Market is as close to living in Europe as I'm ever going to get.) 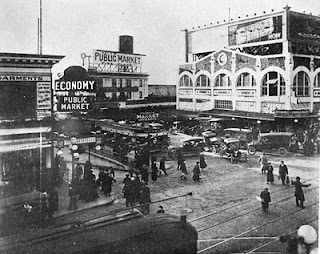 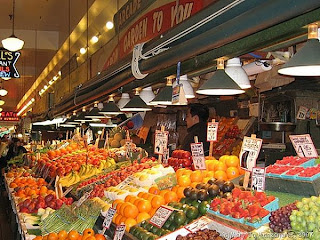