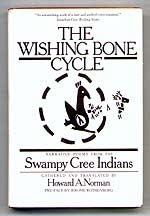 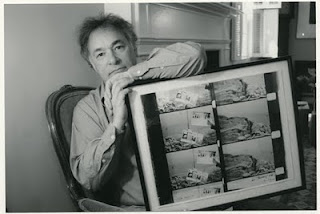 One night I was wishing things all over.
Then, I thought there were too many stars
in the sky
and not enough light down under,
in the earth.
That's when I wished a star down
for that mole
to carry on his nose.
He took it down under.
He walked around with it under there
and tried it out.
Now he comes up sometimes
to let his star talk to the other stars
in the sky.
It's dark down there
but his nose sees where he's going.

I often cite W.H. Auden, Seamus Heaney, James Merrill, Dylan Thomas, Kay Ryan, and Richard Kenney as my favorite poets. If I'm thinking about kids, I include Lewis Carroll, Walter de la Mare, A.A. Milne, and now Alice Shertle and Joyce Sidman. But if I had to grab one book of poetry off my shelves as I was escaping a burning house (do other people think about things like that?) I might just choose The Wishing Bone Cycle, a collection of narrative poems from the Swampy Cree tribe, gathered and translated by Howard Norman. I often take it out and read it; it never disappoints me. The poems are, as Jerome Rothenberg says in his preface, beautiful in a "gentle, crazy" way. I hope you will all look for it - it's out of print, but it's worth hunting to find a used copy. Reading the poems straight through (which is something I rarely do with a book of poetry) has a cumulative effect that is unlike anything other gathering of poems in a single volume. Howard Norman, of course, has translated them brilliantly - no surprise there, considering his own gifts as a poet and novelist of such books as The Bird Artist and Devotion. Here is one more sample:

One time I wished myself
into a moose deer.
I was lying down and sleeping
with my own shadow
and then you came along
saying the sun was in your mouth,
saying you were thirsty!
I wished you to where you drank tears.
It was a lake
everyone cried into,
full of people's tears.
At night
some of the tears left
to look for sad faces
to fall down.
Then the whole lake cried.
Some said it was the loons.

Poetry Friday today is being hosted by the people over at the PaperTigers blog . Papertigers.org celebrates multicultural writing from all over the world, with a particular emphasis on the Pacific Rim and South Asia. I hope you will go to their blog site to see what people have posted for Poetry Friday this week. And click here for an interesting article about the art of translation.

I also hope you will read the Wednesday 4/7 post on Cynsations, where author Cynthia Leitich Smith provides information about how to help with Operation TBD - 10,000 Books to Be Delivered on Native Reservations and Tribal Land - a worthy cause, putting books right into the classrooms and librariess of young Native American kids.
at 10:04 AM