Poetry Friday - The Clover. The Plover. 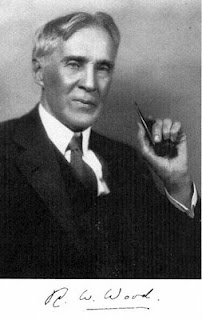 When visiting San Francisco last week, I went into the Mission District (thanks to recent VCFA graduate Sharry Wright for the invitation to wander with her and with fellow graduate Sarah Tomp)  to 826 Valencia (the kids' writing center founded by Dave Eggers) and bought a book at their "Pirate Supply Store." First published in 1907, this little book, titled How to Tell the Birds from the Flowers (the original had a subtitle: A Revised Manual of Fornithology for Beginners) was written and illustrated by someone named Robert Williams Wood (1868-1955) - I had NO clue when I bought the book who he was, but I've found out since then that he was a physicist and inventor, well-known for his work in optics and ultra-violet light. He invented something called the "liquid mirror astronomical telescope" and was the father of infrared photography. Not the typical resume for a poet.  It's going to be his birthday on Sunday, so posting this is an homage w/ birthday celebration.

The gist of the book is this: An animal and a flower are compared in each poem. The names of animal and flower must sound alike. Here's a look at the some of the pairings:

The Crow. The Crocus.
The Tern. The Turnip.
The Lark. The Larkspur.
The Parrot. The Carrot.
The Quail. The Kale.

And here's one in its entirety, called The Clover. The Plover.

The clover and the plover
Can be told apart with ease,
By paying close attention
To the habits of the Bees.
For ento-molo-gists aver,
The Bee can be in Clover,
While ety-molo-gists concur,
There is no B in Plover.

Also: If you're in SF, have a bite to eat at Cafe Divine, on Washington Square in North Beach. Food is SCRUMPTIOUS, atmosphere is just what you want when you come in from a sunny interlude watching people at Washington Square. 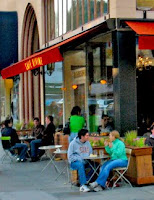 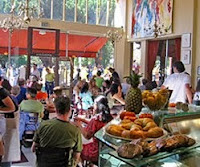 "
This is the power of art: The power to transcend our own self-interest, our solipsistic zoom-lens on life, and relate to the world and each other with more integrity, more curiosity, more wholeheartedness." (Maria Popova)
"A few well-angled sentences announce to me if this is a voice whose command I can trust or whose quirkiness intrigues. Style, after all, is metabolism." (John Lahr)
"Thoreau got up each morning and walked to the woods as though he had never been where he was going to, so that whatever was there came to him like liquid into an empty glass."(John Cage)