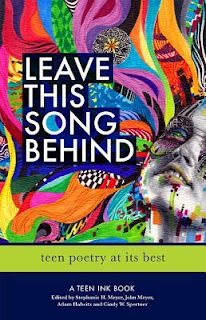 First, a confession: I cringed a little when I saw the subtitle of Leave This Song Behind: Teen Poetry at its Best. My assumption was that the book would be filled with a certain sentimentality, with prose broken into random lines, with poems unmindful of the music of language, and with poems over-saturated with sex, self-doubt, self-infatuation and angst. I assumed, too, that the poetry would feel "forced,"  that is, it would be the kind of poetry wrung out of bored teens by well-meaning English teachers trying to keep a love of poetry alive in 21st-century America.

Second, a correction: All my assumptions proved wrong. This is an exciting book, filled with strong poems. It makes me hopeful about that "keeping poetry alive" dream. I hope high-school teachers reading this post will take a look, and, if they like it, will share it with their colleagues and students. All the poems were published in Teen Ink, a magazine of teen writing which has been published since 1989. The editors of both the anthology and the magazine are Stephanie and John Meyer, who must be doing something right - it isn't easy to keep a poetry journal alive for 27 years.

I found plenty of favorites, and the poem below is one of them - it's the first poem in the book, and it got me turning the pages. Just look at its attention to the sound of the words. It engages the three elements Ezra Pound found most essential: melopoeia (words charged with a certain musicality which further affects their meaning), phanopoeia (the effect of image on the imagination), and logopoeia ("the dance of the intellect.") See what you think:

She liked to sit in the backyard
And watch the neighbor's laundry
Swing on the clothesline, crisp pale
Blue button-downs of the husband
Wrinkling in the half-wind, Summer
Sighing across the silky surface of
The twisting sundress, first one way,
Then the other, like soft hips
Swinging, one way, then the
Other, and when they were just
Washed and still wet they would
Flap and flick beads into the grass
That would flash fast down like
Little silver raindrops, one way,
Then the other.

That's a lovely poem, and (minus a few idiosyncratic line breaks) I wouldn't mind having my own name at the bottom of it.

The anthology divides poems into categories that can help teachers explain what makes a good poem tick (strong images, sensory details, clear language, playing with structure, establishing a narrative, metaphorical thinking, wit, and "fresh takes on the familiar.") So it would make a great textbook without feeling dusty or dull. And what better way to motivate teens than giving them a book of poems written by teens?

Let your students know that submissions can be made at the website for Teen Ink (click here for the link.)