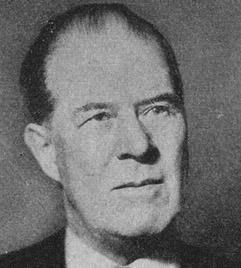 I'm so happy that Tricia over at The Miss Rumphius Effect is asking us to stretch our way to clerihews this week. CLERIHEWS ARE SUCH FUN! The goofier, the better - that's what I was taught. W. H. Auden wrote some doozies.
The form was invented by Edmund Clerihew Bentley (pictured here) thus the name. Bentley was a great friend of G.K. Chesteron and wrote four mysteries which have been referred to as the beginning of the "modern mystery." Dorothy Sayers loved those books. Bentley published a book of clerihews titled Biography for Beginners. The form appears, at first, to be simple, but there are nuances to it that make the good clerihews truly good. Cleverness reigns supreme. Here is what a clerihew looks like:

1. Two unmatched (irregular meter) rhyming couplets. The irregular meter is part of the humor. The third and fourth lines are usually longer, so at its best the clerihew feel like it's been written by someone not totally in control of the poem. The rhyme is usually part of the humor, too - it's often torqued or contrived - again, as if the poet had not totally mastered the thing. The clunkiness of the clerihew is a defining feature, not a mistake.

2. One whole line - I was taught that it always was the first line - is the name of someone (usually famous....) Rarely anything else in the name line - if so, it should add briefly to the humor. But generally, nothing but the name.

3. Tone is satirical or, actually, whimsical - it pokes fun at the named person but isn't severe.

Here is the sample that's often given:

Sir Humphry Davy
Abominated gravy.
He lived in the odium
Of having discovered sodium.

[Sir Humphrey Davy, by the way, also wrote poetry, along with being a chemist. He conducted science experiments on his sister's dresses. His friends apparently said this about him: "This boy Humphry is incorrigible. He will blow us all into the air." I say that to comfort mothers out there whose children are incorrigible.]

Back to the clerihew. Here are my contributions. First, a few about writers, then a more or less political clerihew spiced up with Schezuan take-out, and finally, a pirate clerihew.
----------------

Robert Frost
Didn't often get lost.
But when he managed to
It was usually the fault of a road or two.

W. H. Auden
Occasionally turned up sodden.
(Getting himself plastered
Came after his muse had been mastered.)

Dorothy Parker
Just got darker and darker.
She wasn't really much fun.
But she was awfully clever with a pun.

Ogden Nash
Woke up with a rash.
"I bet it was that cute little duck.
Bad luck."

Edward Teach (aka “Blackbeard”)
Made lots of people afeard.
You could offer to write him a clerihew,
But he’d just as soon put a sword right through you.

Here is a photo of our soon-to-be ex-president, without dreads, eating something that will not improve his aura, and a picture of Blackbeard looking distinctly Rastafarian (and not at all like someone you would call "Teach." 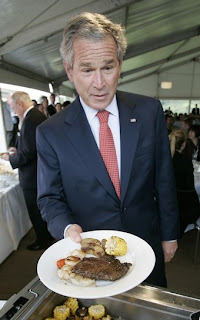 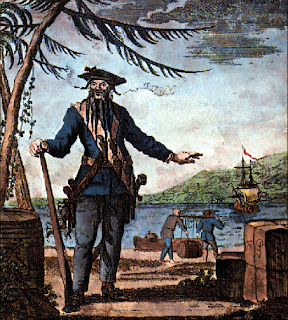