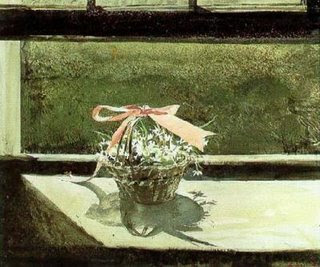 I'm reflecting on Poem-in-a-Pocket Day this week, but first I have a brag: Today is my youngest son's birthday. He's grown now, but believe me, May Day of 1983 feels like yesterday (I hear Fiddler On the Roof's Sunrise/Sunset playing over and over in my head ....) We almost lost Mike when he came down with meningitis at seven months old, but he rallied and now he's about 6'2' tall, 26 years old, strong, creative, bright - and he has a heart of gold. In his honor, I'm going to post this original poem, written several years ago and dedicated to him:


Here’s how it goes:
you toss the script and jump over the goose

with the golden beak.
You’re all seat-of-the-pants, all break-

the-pattern. You run
from the fairy tale fowl toward the runt

of the old sow’s litter, you don’t sneak back
to appease the goose or make bleak

apologies, you don’t try to restitch
the picture. Instead, you shift

the story’s gears, the rules
mid-game, you’re a new hero made to ruffle

feathers— look, it’s here-pig-pig-piggy,
why not a new rhyme, and we’re wigged

out not knowing the answer. You make stars
burn from pure squeals and snouts, you stir

up all those piles of straw in the Big Barn.
Oh, how lucky we are that you were born

under such a strange sky
and so close to midnight.

Yesterday was Poem-In-Your-Pocket Day. I just love that whole idea - to carry a poem and share it with friends, co-workers, family. My choice for the day was The Shirt by Robert Pinsky, pictured above (Don't you love to see poets laugh? This is a secret I share with kids: Poets are very funny people. Not enough people know that!) : 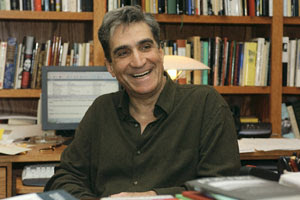 I just love how physical that poem gets - celebrating the shirt itself, each detail, and celebrating the people who made it, the woman inspecting it for shipment. I love how it evokes the ghosts from the Triangle Fire, making them seem real (and is it possible not to shudder in the year 2009 at the equivalency here of Triangle Fire and World Trade Center - all those falling bodies?) Shirt as Evocative Object - able to conjure up the object itself, and by doing that, to speak to the abstractions of life, death, labor, love. It's such a beautiful poem. And carefully crafted - like the shirt. Message and medium, perfectly matched.

I know, my pocket had to be big to accommodate that poem, and there were only a few people patient enough to let me share it. I would have needed an even bigger pocket for Walt Whitman's Crossing Brooklyn Ferry, which is a poem I would gladly take out any day of the year and share. A friend of mine actually read it to a bunch of us once, on a ferryboat as it crossed Puget Sound. That was a great moment.

The photo of Whitman, below, is unusual, and I like it - just think of that rather bookish man being the wild man/poet we love!

For a smaller pocket next year, I think I'll use the poem I posted for Poetry Friday on 10/28/08 - Valerie Worth's Bell.

I hope you carried a poem in your pocket, too, that you made the day a Katy-No-Pocket day, found a carpenter's apron, and put a poem in every pocket! 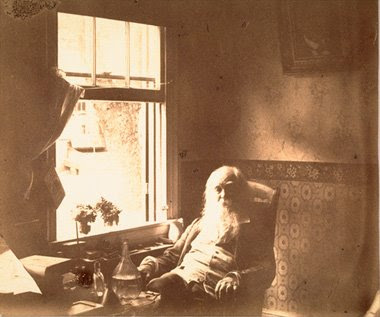 The Poetry Friday round-up is over at Maya Ganesan's blog ALLEGRO today - it's always exciting when someone new enters into the Poetry Friday circle, and this time, it's more than exciting , it's remarkable: Maya's blog says she is "an eleven-year-old poet who indulges in music, art, books, and writing." She loves "performing, traveling, and the little things." She also likes collecting pencils!! Oh, I'm with you, Maya - pencils are heaven! Congratulations to you on your great blog and on the very lovely original poems you've been posting.