Very excited to be hosting Poetry Friday this week right here at The Drift Record! First, before I forget: HAPPY THANKSGIVING TO ALL, in advance! And Canadians, belated Happy Thanksgiving to you. I am either early or late, depending on whether you're facing north or south.

For those of you who are asking, I'm not sure who is hosting next week. I believe (fingers crossed) there's going to be a Poetry Friday blog page (NOT for posting - just for checking the schedule to see who is hosting.) I'll post that URL here once I find out.

I am now going to paste in the obligatory cute turkey: 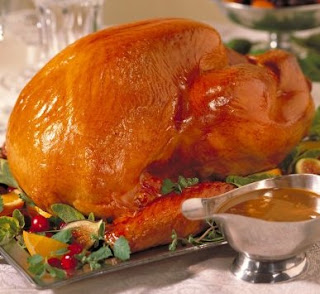 My Idea of a Cute Turkey, Apologies to Vegetarians


And here is the obligatory Thanksgiving poem, which everyone in my family recites tongue-in-cheek when we're offering up our Thanksgiving prayer:

Thanks for the grub.

It's not as sacrilegious as it sounds - we say it with a great deal of exuberance and praise in our hearts for the bounteous feast in front of us and for all our blessings. And since we'll have twenty-two people around the Thanksgiving table next week, a little levity will go a long way.

Since I'm on the West Coast and some of you are in different time zones, I figure it's best for me to get a jump on Poetry Friday and post this before some of you go to bed -  that way, you can leave your late night links, and I'll do my first round-up of them in the morning.  Of course, if you're in London, Moscow, Istanbul, Singapore, Berlin, Beijing, Sydney, Capetown, Kabul, Mumbai or Antarctica, you're already snoozing.  Or...no...you've just gotten up...or you're part-way through a different day altogether. Thinking about friends in Australia already having lived part of a day I haven't woken up to yet makes my head hurt. Someone give me an orrery, show me Earth's position relative to the sun, make those little gears move and those balls spin, tell me about time zones, the Earth spinning in space, and tell me about the tilt and the seasons and what it means to my apple tree....) 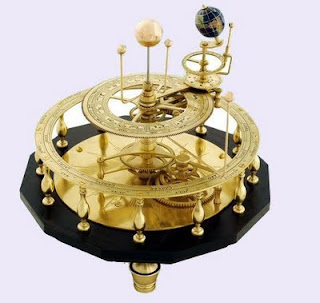 Enough of that. Just click on Comments, then LEAVE YOUR NAME AND A LINK, say a little something about your Poetry Friday page, and I will round it all up and guide people to your blogs throughout the day.

1. Elaine Magliaro, headed to the NCTE Convention in Philadelphia,  has two Thanksgiving poems (one by Ivy O. Eastwick, the other anonymous) for her "Poetry Wednesday" contribution this week. You'll find them at  The Wild Rose Reader.

2. Diane Mayr (who left a neat little poem in the The Drift Record comments yesterday) calls on John Greenleaf Whittier to celebrate pumpkin pies over at Random Noodling, while at Kurious Kittly's Kurio Kabinet, she looks at New York City's Poets House.

3. Over at The Miss Rumphius Effect, Tricia is sharing a poem by one of my favorite poets, Mary Cornish, who also happens to be my sister.  It's a lovely poem titled "Hand Shadows," and Tricia posted it before she knew I'd be hosting - what a small world (as that orrery proves) !! Tricia also has a link to her Poetry Stretch Results this week.

4. Check out the wild rumpus at Playing By the Book (excellent blog name!) where you'll find not only great photos of two bouncy kids but a poem by Michael Rosen and a review of his book Quick, Let's Get Out of Here (illustrated by Quentin Blake, who knows a thing or two about bounce.)  This is Playing by the Book's first post to Poetry Friday - welcome!

5. Semicolon offers us a more serious prayer about Thanksgiving by Matthias Claudius.

6. A lovely poem about "the babble of babies" over at Charles Ghigna's Father Goose.

7. Check out a book, one old elm, old bones and a question from Dianne White (diannewrites.)

8. As part of the Winter Blog Blast Tour, Kelly Fineman of Writing and Ruminating has an interview with author Lisa Schroeder about (among other things) her verse novels.

9. Mary Lee has a poem about fear over at A Year of Reading. Fair warning: Be prepared for something with a few too many legs.

11. Martha Calderaro got inspired by everyone howling at the moon last week and has created her own poem about a poem, titled "Hunting for the Moon/Dog Poem" - it's dedicated to dog/muse Brady ("full-body wag/ and eyes like chocolate Tootsie Pops")  Read it here.

12. Yummers. Jama Rattigan continues her culinary contributions to Poetry Friday with a look at The Poet's Cookbook by Grace Cavalieri and  Sabine Pascarelli over at alphabet soup. ("...linger in Tuscany...." - that sounds nice!)

13. Jumping the Candlestick's Debbie Diesen is thankful for beautiful parks this Thanksgiving, and she urges us (via an original poem titled "Are You a LitterShrug?") to join in on clean-ups of our local parks.

15. Karen Edmisten remembers a Billy Collins poem  she likes called "Forgetfulness" (which starts, "The name of the author is the first to go....") and provides a link to his reading of it.

16. Check out two poems that mention November (one by e.e. cummings, the other by Joe Pacheco) and a knock-out photo of a tree that seems to be lit from within over at Tanita Davis's blog.


17. Tabatha Yeatts got in touch with Romanian poet (now fully New Orleans-ian) poet and NPR commentator Andrei Codrescu for permission to post his poem titled "Away," which he'd forgotten he wrote! Follow Tabatha's links to Codrescu's interesting website, too (what other poet includes a CD by the New Orleans Klezmer All-Stars with his new book of poems??

18. For a poem by Lucy Maud Montgomery (she of Anne of Green Gables fame), check out Check It Out. And at jone's other blog, Deo Writer, you'll find an original poem about the game of jacks, written as a response to Tricia's Poetry Stretch this week.

19. Two haiku (I like the way those two words sound like bamboo wind chimes knocking against each other, don't you?) by Issa have been posted by G.R. LeBlanc at Reflective Link.

20.Anne Shirley is sharing two poems this week over at Writers Workshop Wow and Woes: Wallace Stevens' "Anecdote of the Jar" and Kathleen Halme's "A Diversion."

21. Jack Wiler, a New Jersey poet who helped organize the Dodge Poetry Program's work with high school students and teachers, lost his battle with AIDS last month, but you can read one of his poems over at Author Amok.

22. Miss Erin posts a poem that struck a chord. It's by a Bengali poet I'm not familiar with -Vijaya Mukhopadhyay. It's always fun to discover new poets!  Thanks, Erin.

23.  An anonymous poem called "Twas the Night of Thanksgiving" (do I hear Christmas sneaking in??) is posted over at All About the Books by Janet Squire. And that wraps up the Pre-Thanksgiving post (doesw that sound like an oxymoron?)

24. But I've saved that last for a post-Thanksgiving post: Andromeda Jazmon over at a wrung sponge is offering an original poem called - are you ready for this? - "Chatting with Santa."

I won't keep moderating the comments now - because it's Saturday - but if you're a bit late with your post, just leave a link in the comments for people to read. Thanks to all who participated - it was my pleasure to host the round-up.