Next Monday morning the ALA will make its Youth Media Awards announcement and I, for one, will be listening when they do. I love following the Mock Caldecotts and Mock Newberys right up to the day the winners and honor books are revealed. And I'm just as excited to hear about the Sibert (non-fiction); the Batchelder (translations); the Pura Belpre (Latino); the Geisel (beginning reader); and the Coretta Scott King (African-American.)  Now if only the ALA would make the announcements in the evening, I'd have an ALA Pizza-and-Popcorn party where we sit around, just like it's the Oscars, and bet on who will win.

Let's hear it for the wonderful books of poetry being mentioned as possibilities for the Caldecott - the stunning illustrations by Rick Allen for Joyce Sidman's Winter Bees; ditto the artwork by Melissa Sweet for Paul Janeczko's Firefly July; Jon Muth for both text and illustrations for Hi, Koo; Becca Stadtlander's illustrations for On the Wing by David Elliot, and the illustrations by Gary Kelley for J. Patrick Lewis's Harlem Hellfighters. This year I'm going with a dark horse, hoping that Blue on Blue by Dianne White, with wonderful illustrations by Beth Krommes, will get some of the love it deserves from the Caldecott committee. 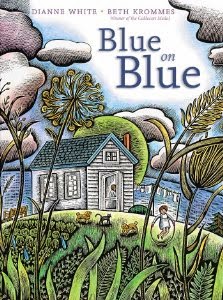 Having looked at the Mock Caldecotts and Mock Newberys, I think Marla Frazee is likely to get the picture book medal for The Farmer and the Clown, and it looks like both the Newbery and the CS King are headed the direction of Jackie Woodson for her verse novel, Brown Girl Dreaming (which also won the National Book Award.) Maybe The Family Romanov will get the Sibert? and Frida by Yuyi Morales for the Belpre?  I have no idea what book will win the Batchelder, though I do love the fact that books originally published in another language are finally getting translated into English in the U.S.

Well, I can't have a Pizza-and-Popcorn party, but I can ask which books you would like to see get the medals. Any of the poetry titles mentioned above? Other favorites? I'd love to hear about them in the comments below.

The Poetry Friday round-up is being hosted today by Paul at These 4 Corners. Head over there to see what other people have posted.